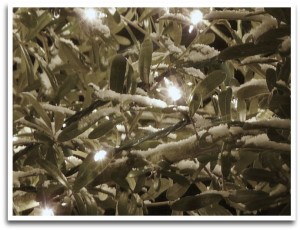 Yesterday, for the first time in almost 4 years, it SNOWED in Spring Texas.

The official time it started snowing I do not know. But for me it was 3:30 pm. I was busy working on my real estate marketing plans for 2009 from my home office when I heard cheers of joy from outside. I looked out my window and listened a little closer and caught sight of the elementary kids who were getting off the school bus and jumping up and down yelling “Its Snowing, Its Snowing, Its Snowing”.

I had to stop working and watch the big snowflakes float down from the sky. As I continued to watch it snow, my mind was flooded with wonderful childhood memories of winters in the Midwest where I grew up.

Childhood memories of building snow forts and stock piling them with snowballs for an attack on an unsuspecting passerby, sledding down hills on the lighting fast silver circle which was so cold it felt like you were sitting on an icicle, laying in the snow and making beautiful snow angels, putting on bread sacks before putting on your snow boots to keep your feet dry, and coming back inside from the cold to a mug of hot cocoa.

As a kid, I too was excited to see it snow. But unlike the kids in Spring Texas, we got snow days. And the only thing that was better than one snow day was two snow days.

Even though I moved to Spring Texas to get away from the snow, part of me would not mind having a snow day once and while. That is with the caveat that I could just stay inside and watch it snow and not have to drive anywhere.

The photo above was taken at 9:30 pm last night of fresh snow clinging to the branches of the live oak tree that resides in the front yard of my home. This morning I was hoping to marvel once again at the snow’s beauty. But I was too late. Yesterday’s snow had already departed.

Will Spring Texas get a White Christmas?  Probably not. But we all enjoyed the day it snowed.