2009 School Ratings for Spring Texas schools are out 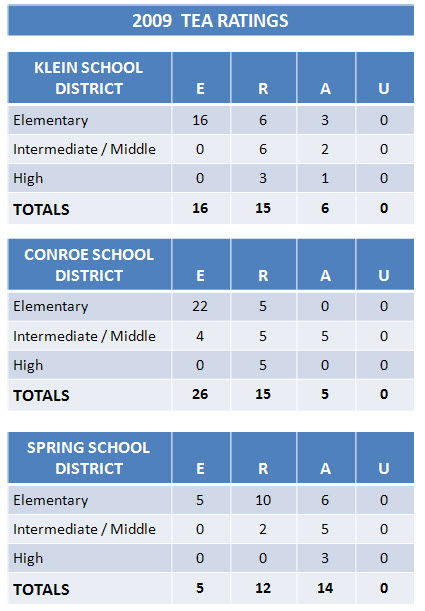 Specialized instruction and improvement on test scores have paid off for the schools in the Spring Texas area as numerous campuses have been able to improve their TEA (Texas Education Agency) ranking in 2009. The TEA rates schools and districts primarily based upon the test results of the Texas Assessment of Knowledge and Skills (TAKS).

A standardized test that is administered to students in grades 3 – 11. The ratings given by the TEA to the schools and districts are (E) – Exemplary, (R) – Recognized, (A) – Academically Acceptable, and (U) – Unacceptable. The ratings are one of the ways parents evaluate Spring Texas schools in determining the quality of education provided to their children.

84% of the Klein school district campuses earned an “Exemplary” or “Recognized” rating an improvement over the prior year’s figure of 65%.  One of the biggest improvements was in the quantity of “Exemplary” rated campuses as the quantity increased from 7 to 16 campuses.  In addition, the Klein School District increased its District rating from “Academically Acceptable” to “Recognized”.

The Spring School District continues to work hard and although its percentage of campuses achieving a “Recognized” or “Exemplary” rating remains unchanged at 55% compared to last year it has made strides at the individual campus level.  With 4 additional elementary schools achieving an “Exemplary” rating this year. 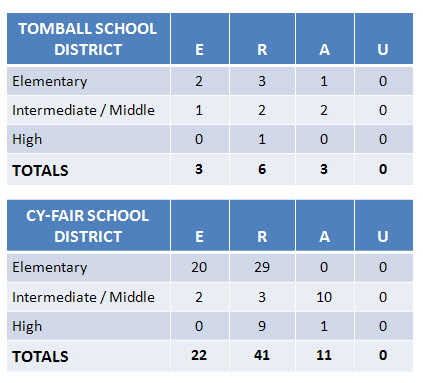 The Cypress – Fairbanks School District also known as Cy-Fair remains top notch earning for the second year in a row a Recognized rating for the entire school district. Cy-Fair also continues to improve at the individual campus level as the quantity of campuses earning a “Recognized” or “Exemplary” rating has gone from 54% of the campuses in 2007 to 85% in 2009.

Additional detail on the ratings, student – teacher ratios, and campus demographics is available at TEA ratings. When relocating to Spring Texas you have a lot of decisions to make and deciding upon which schools you want your children to attend is one of them. Do your research and review the school districts and campuses TEA ratings, review the student – teacher ratios and other public data. After you have narrowed your choices down, go and visit the campuses you are considering. Get a feel for the school by walking through the halls, meet with the Principal and teachers and then make your own decision on which schools you want your kids to attend.

Even if you do not have children attending the Spring Texas schools the quality of education provided by the schools will still have an impact on you. The impact will be felt in your pocketbook. Good schools increase the value of Spring Texas homes. Bad schools will bring down the value of your home as less people will be interested in the area.